5-22 September 2012
Blindside
In the exhibition Start, six artists have been given the instruction to start. Deliberately wanting to present work that is partial in nature, Start highlights that aspect of practice which is most vital: the transformation from abstract concept to concrete realisation.

Start is a self-generated project in which BLINDSIDE will be the final testing site for the hypothesis that the act of commencement could constitute an art practice. Asked to consider the proposition that the same starting point has infinite possible endings, the artists included in the exhibition will produce work in response to the curator’s question: if you start at the same place more than once will you still reach the same conclusion?

Start asks a very fundamental question: How do artists decide what to make? And moreover, how are ideas generated, and can the start-impulse be located as a moment, or action? 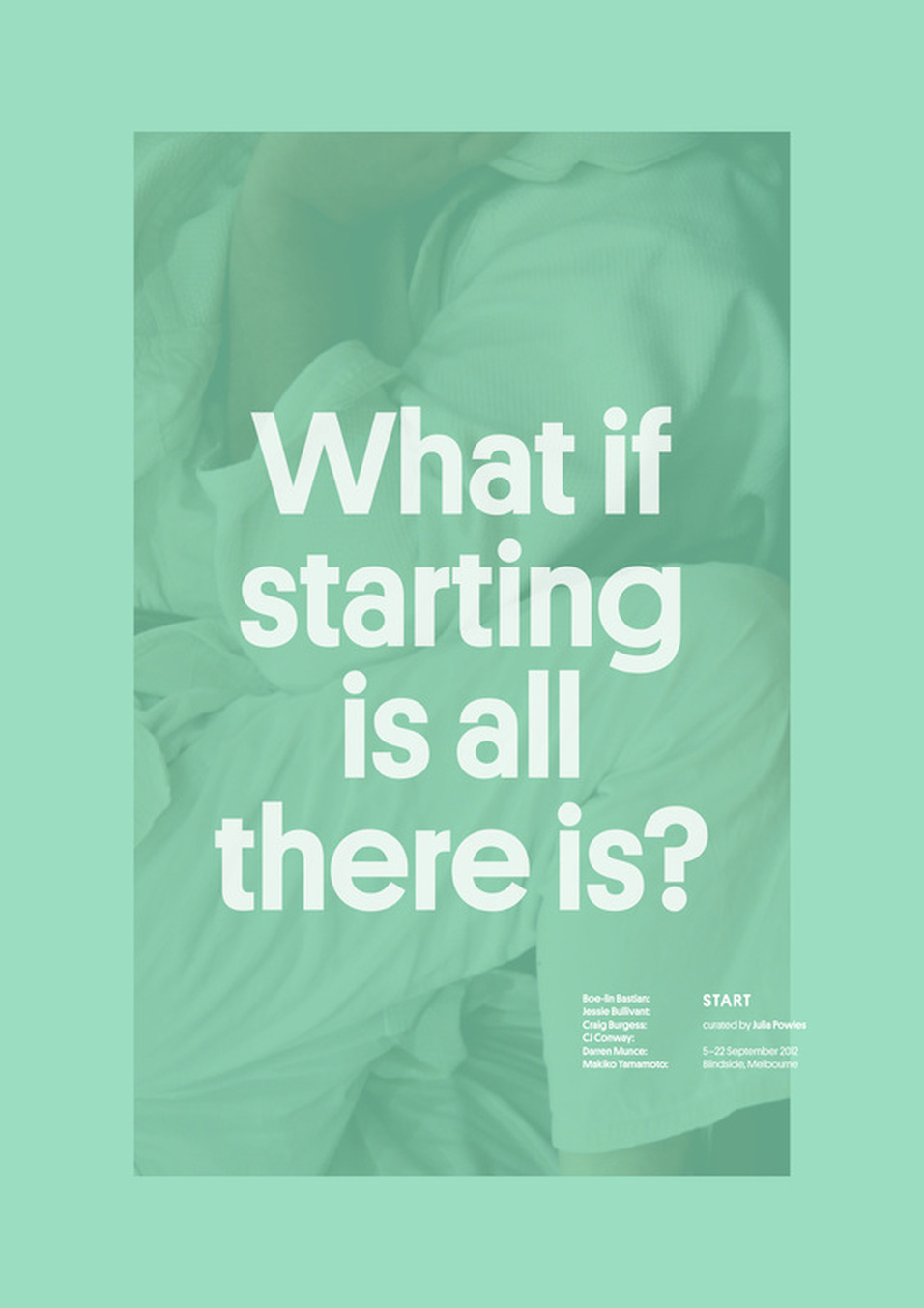 At the beginning; initially.

‘… what makes the work interesting is if you choose the right questions’[1]. Bruce Nauman

The concept of commencement is so archetypal to us that we continually engage in it without acknowledgement. We set out, we begin, and we start over, noticing that we are at the beginning of something only on the rare occasion when circumstances alert us to our actions. The exclusion zone at the airport for example is a point of change or difference that denotes the start of a journey. But at what point did the journey really start? For starting necessarily dreams itself into being, like the performativity of a speech act; starting creates itself. Regardless of the exact origin of any given start – was it a thought, a memory, an action - starting is still a point of separation. A line. A mark. An act.

In this project six artists, Boe-Lin Bastian, Jessie Bullivant, Craig Burgess, CJ Conway, Darren Munce and Makiko Yamamoto have been invited by the curator to start. The instruction could just as easily have been to make or to do, any other verb in the imperative. However by choosing the term start the artists have been challenged to consider what it means to start, how they decide what ideas are worth pursuing, how they each confront their individual obstacles, and essentially how they might consider the uniquely different but universally similar doubts that hinder starting. Start seeks to examine how artistic practice originates, how the intersection of process and thought results in action.

Moreover throughout this exhibition the concept that starting might constitute practice is examined.

What if starting is all there is?

The idea of a journey maps out a path that can only be seen in retrospect and the metaphor of journey conditions us to think lineally. It is only in looking back, and reflecting that any sense of a cohesive strategy emerges. At any given point along that path there exists the possibility of change, of rupture, of accident. The use of chance in art practice must have obviously always existed – by chance the story of the bison is of greater significance than the antelope, so it is drawn onto the walls of a cave – but chance as practice was defined in the early 20th Century by the Dadaists, and practice as idea was established through the work of Marcel Duchamp who dispensed with production when he exhibited the first of his readymades in 1917.

Art now freed from the pressure of production has seen the focus shift from outcome to ignition. Starting, and how one starts has therefore become a key factor for consideration in contemporary art.

‘And I don't have any specific steps to take because I don't start the same way every time[2]’ Bruce Nauman.

‘In the studio, I don't do a lot of work that requires repetitive activity. I spend a lot of time looking and thinking and then try to find the most efficient way to get what I want, whether it's making a drawing or a sculpture, or casting plaster or whatever’[3]. Bruce Nauman

What is a start? If starting does not occur at an exact moment - and who among us can precisely determine that instance - it may be that starting is in fact a durational activity; that starting might more accurately be perceived as a space that one enters in to. And therefore it is equally possible to suggest that starting is enacted over and over again in infinitesimal variations as particular actions produce results that subsequently require further action.

This form of starting is not restrained by notions of competition or predicated upon results.

This form of starting is located as a necessary action within the life cycle of human endeavour. In an outcome driven world starting is of little importance, rather it is how one negotiates the terrain in-between starting and finishing that determines success or failure. Or so we assume. In his poem The Circus Animals Desertion, WB Yeats recognised the necessity of starting again, of throwing off the tricks of his oeuvre and returning instead to the source, that place where all the ladders start, in the foul rag and bone shop of the heart[4]. Written at the end of his life, Yeats’ poem is weary with the knowledge that to avoid stasis one must return and start again, and as well as reminding us of the folly for the artist of being too self-satisfied Yeats points out something obvious: the creative process is not linear.

‘Even to the creator himself, the earliest effort may seem to involve a commerce with disorder. For the creative order, which is an extension of life, is not an elaboration of the established, but a movement beyond the established, or at least a reorganisation of it and often of elements not included in it. The first need is therefore to transcend the old order. Before any new order can be defined, the absolute power of the established, the hold upon us of what we know and are, must be broken. New life comes always from outside our world, as we commonly conceive that world. This is the reason why, in order to invent, one must yield to the indeterminate within him…[5]” Brewster Ghiselin

Starting can also be difficult because it requires so much faith, and we hold within us the collective fear of the still born, the horror of a start that goes nowhere. Fear of starting is perhaps most popularly aligned with the concept of ‘writer’s block’, that awful inability to give written form to even the most preliminary of ideas. While the impact of writer’s block upon the writer was made terrifyingly manifest in Stanley Kubrick’s film The Shining[6], more commonly other less dramatic forms of near-insanity emerge: in Albert Camus’ novel The Plague[7], a character writes and re-writes the opening sentence to a manuscript, struggling for perfection. Agonising over the structure and grammar to the point of stagnation, this start becomes a form of entrapment. Such a ritualised repetition or postponement of action under the guise of activity, does serve to protect the writer from risk, but comes at the cost of self- knowledge. Camus’ character will never face the challenge of finding out whether or not he can be a writer, as he so wants to be, because the fear of discovering his own limitations is immobilising. For Camus, his character’s uncertainty and deliberation stand in stark contrast against the might of an uncontrollable force, a plague, which sweeps over a city, coming from nowhere, out of the recesses of memory, an action without beginning or end.

The first half of the 20th Century was characterised by a belief in a chronology-based progress, a condition of thought that sees the end as always better than the beginning. Despite (or possibly because of) the disillusionment with utopian ideals that followed the end of the Second World War, we are today preoccupied with attainment. This conceptual conditioning might also account for the strange presentation of acts of commencement, or starts, as acts of closure, such as happened in South Africa at the end of the 20th Century. In order to redress the horrors of decades of apartheid The Truth and Reconciliation Commission brought the victims and perpetrators of racial crime together in an attempt to close a chapter in the nation’s history. The reasons for presenting the beginning of a political and cultural change that will in reality take generations to become effective as the end of something are patent; the duration taken for a healing process of this scale is daunting. How many starts will such a project actually require?

If starting might also be finishing, and everything else in-between, what does this mean for the practice of a contemporary artist? Perhaps it points to alternative models of praxis, ways of making that are not concerned with attainment, but rather are imbued with the concept that art might be a conduit that links divergent aspects of contemporary life. When an artwork is partial or propositional, and the possibility of failure has become a working methodology, the role of the audience expands beyond voyeur or even commentator to participant. It is therefore through the thoughts, ideas and associations of the viewer that the work achieves its potential.

So now let us make our own start. And there, as the words are spoken is the deceit, for I have already started, as have you, at some point in the past when I thought to begin writing, and when you decided to visit the exhibition, and so the argument stretches back through time and sideways to encompass the collective possibility of commencement. But a start still is. It is something different. A change. An abstract thought takes concrete shape in the world no matter how far back we pursue its origin. A line. A mark. An act.